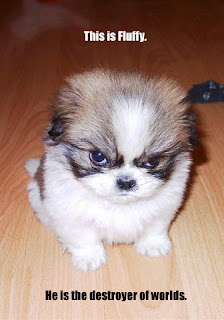 Where do I even start?


There is an article in IT World that covers a study linking IT sabotage and work behavior.

Apparently, this “study” was performed by the United States Military in conjunction with CERT, and they have decided that troublemakers should be easy to spot.

It’s time for a reality check, boys and girls. Let’s start deconstructing this list, shall we?

In this age of under funding and over working IT departments, there are a whole lot of disgruntled people out there. Managers (some, not all) treat IT as a major cost center and are always looking for ways to cut funding to it while expecting the same level of service they had when they had a well staffed IT department. After all, they always hear how much we’re supposed to love our jobs no matter what, so what’s a consistent 80 hour per week schedule between friends, right?

Ditto with being paranoid. Those same managers love to manage small kingdoms and often try to act as the no-so-benevolent dictator of all that they survey. They love to hold over the heads of their IT staff how they can all be easily replaced (when they can’t. That kind of institutional knowledge takes a long time to acquire), or better yet that they could outsource the whole shebang to for a 10th the cost.

Are people who are constantly worried about their jobs and only told how badly they perform paranoid? Hell yes and with good reason. Hostile enviroments breed paranoia (among other things).

I don’t know about the rest of the IT departments out there, but I know that there were (and still are with some of my clients) a lot of times where I had to work on things when other people weren’t there so the downtime they experienced was minimal. Weird hours are occasionally a fact of life, and this may come as a shock to some people, but we actually do need sleep and down time.

There were some occasions when I was still working for the non profit on campus when I came in late looking like death warmed over because I’d been run into the ground with putting out fires the night(s) before. Thankfully, the directors were pretty sane and if they saw me like that, they’d often tell me to take the day off with pay. There were even instances where I was basically “forced” to take a few days off with pay just so I could have some time for myself. They realized that, between the essentials of classes, working for them, and my travel time, I was pulling 70+ hours a week on average, and they didn’t want to see me burn out.

All I can say is that it’s amazing what a day of doing nothing but a day trip can do for your sanity and stress levels. Unfortunately, this is not the norm in the business world. The norm all too often seems to be “we need you to work 70 hours and get paid a salary based on 40. Oh, and forget about taking any of your vacation days.”

As for the next item on the list, define “arguing with colleagues.” Are we talking extreme antisocial behavior or just pointing out that the proposed “solutions” are really bad ideas. Because I hate to break it to you, but there are a lot of co-workers (be they equals, managers, or C-level) that don’t take any dissenting opinions well and have a whole *lot* of bad ideas.

Time for the last item on the list – poor performance. Most people do not work in a bubble. This is especially true in IT. A lot of what we do depends on having adequate funding and equipment, backing from the higher ups, enough people who know what they’re doing, and not getting jerked around from one partially completed project to another. If any one thing in that list fails to happen, we can be seen as having poor performance levels. What we do is very complex and if anything goes wrong, everything can go wrong.

You’ll see that a lot of the warning signs for people in IT that are going to sabotage your business can actually start in management or executive level positions. This should be pretty obvious for anyone. We’re people. We work with other people. Treat us that way.

Now, back to the argues with co-workers thing for a moment. There is one quote in this little article that is extremely telling (and, quite frankly, pisses me off to no end):

"So as far as doing the right thing, I'd suggest that you start from the basis that your IT staff are the biggest risk to your organization's security, and if anyone of them disputes this, remember that arguing with colleagues was one of the clear signs of an impending attack.”

Now let me get this straight. If you come to me and start accusing me or my staff of being the biggest risk to your organization and I defend myself or my staff because they are trustworthy and loyal, then it just proves your point because I’m being argumentative??

It’s behavior like that on the part of management, directors, and above that CAUSES this whole problem in the first bloody place.

Now, the people who know me know that I am a very even handed and level headed person, but pulling something like that with me is one of the surest ways to get on my bad side in a hurry. I don’t let anyone accuse me of being dishonest or untrustworthy unless they are joking or have a good reason to not trust me such as having been burned recently (that sort of thing I can understand and work around. Like I said, I’m level headed). But to accuse me for no good reason at all and to take my self defense as an admission of guilt? Let’s say I’ve fired customers for less.

I don’t deal with abusive relationships. Nobody should.

Here’s a word to the wise, people – treat your fellow co-workers like people. I don’t care if you’re working in the mail room or in a corner office, treat your co-workers with respect. That’s not to say that you should be naive (always be aware of possible security risks, that’s just good policy), but be civil, personable and honest in your dealings with the people you work with. I know that’s a stretch in today’s screwed up corporate world, but give it a shot. You’d be amazed at the results.

Posted by James Hollingshead at 12:06 AM