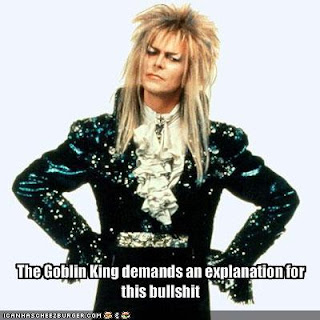 This post brought to you by the letters W, T, and F.

The Republicans in this state are trying to push through a law that would shrink the early in-person voting period from 35 days before election day to 20 days. Their reasoning is that the week long period in which people can register to vote and actually vote in the same day invites fraud.

I can sort of agree with the thought that that might be a problem, but somehow I doubt that is the real reason they're doing it considering the turnout of new voters (most of which probably voted Democrat).

However, that isn't the point of this post. The point of this post is the reaction from one of the locals on the forums for this town's paper. The following is the full comment (user name withheld). It contains no editing for content, grammar, spelling, etc.

"Oh, now that the Democrats stole the election they can change the rules back. I see how it is. A Republican can't buy a break. I wish George W. Bush would declair that he can't step down as President and just keep going until his Brother wants to take over. This country was just getting over the economic mess the Clintons made of our Nation and now we are about to be sent back into it by another Tax and Spend Democrat. Maybe I should go back to school and learn how to give abortions since that is all the jobs that will be left."

First off, this person wants Bush, the man who has trashed civil rights left and right and run this country into the ground as a *dictator*??

Secondly "the economic mess the Clintons made of our Nation"? You mean that period of time when we had a budget surplus and low unemployment? If that's a mess, I'll take that any day of the week, thanks. He can have all the willing interns he likes as well as long as his wife is fine with it (the locals think that is worse than what Bush has done. Seriously).

To be honest, most of the presidents have probably had all of the willing interns that they've wanted anyway.

I'd recommend the poster go back to school, but more in the hopes that he might get some of that "liberal brainwashing" that they claim goes on at schools (and especially colleges).

I'm not even going to go into stolen elections where Bush is concerned.

Posted by James Hollingshead at 5:51 PM