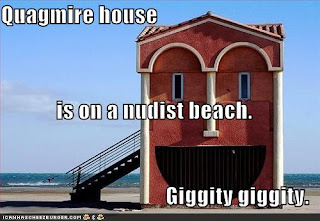 Well, I suppose I should give an overview of the last week since I've been putting it off (i.e. recovering) for the last few days. heh

I wrangled it so that I had a few days in a row that I could spend doing little or nothing on project work (mostly because everyone else is out of the office too) and spent a few days with Karyl.

The drive up, which normally takes an hour and a half or so took almost three due to freezing rain hitting when I was within 20 miles of her place. Thankfully I was driving through a suburb at the time and not on the outerbelt, so I didn't have to deal with idiots trying to drive at normal highway speeds in the ice. As an added plus, it was one of the nicer suburbs (one of the top 100 places to live in 2007), so the other drivers were all fairly great about letting each other change lanes, etc.

After I arrived, that evening and the next day were filled largely with catching up, watching movies, and generally enjoying each other's company. It was a nice change of pace from the insane stress we've both been dealing with over the last several months.

At some point during all of this, her DSL finally got hooked up, so I spent a little while getting that set up. We never did get Earthlink's email program to actually transfer out her messages through any sane means, though. I even tried to get it to use imap with a gmail account so the messages would replicate to the gmail's servers and we could just set up thunderbird to snag them all with pop3.

Earthlink's mail program just stuck its tongue out at me. It wasn't a huge deal; just frustrating.

Christmas morning saw us getting up at about 6am to get ready to go to her parents' house. This is, I think, a form of torture for me at the moment because I've been used to working until about 3am for the last couple of years, so I was sort of zombie-like until after breakfast.

According to her parents, it's nothing compared to what she and her sister used to do as kids - waking them up at 3am to open presents. Apparently they've been getting this as payback for years lol

Presents were opened (after hearing about mine and how much I like it, her mother got her father a gps), lunch was had, Christmas Vacation was watched, and we finally piled back into the car to return to her place where I helped put together her new office chair.

A few hours later, due to weather forecasts (the possibility of more freezing rain) and the knowledge that traffic on the 26th would be a nightmare, I started my drive back. Thankfully it only took about 1:45 this time, and traffic was light in the direction I was headed.

Totally exhausted from the trip (I only got about 6 hours sleep over the course of 3 days), I ended up crashing for 10-11 hours that night and still woke up tired lol

All in all, it was a nice trip despite the weather. In addition, I have to say that I think I'm falling in love with my gps.

Posted by James Hollingshead at 12:34 PM