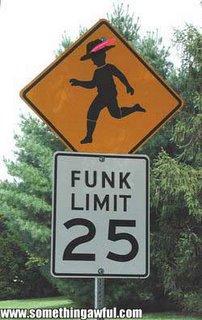 The weird shit that comes out in conversation with my friends and girlfriend would amaze most people. Tonight we were talking about her graduating this year and the possibility of having to move back with her family for a while so she could look for a job. This lead to “ways to freak out your parents”.

Some of the things below came from that conversation, and some of them came to mind later.

The mask? That’s a new style of fencing gear. What’s a “gimp” anyway?

Why were you looking at my credit card statements? Lube Sheep is the name of a company that sells things like bento boxes (they are, actually. And the G rated kind… You just can’t make this shit up)

And to think when I met her that she was this meek, prudish little thing. What have I done?

Posted by James Hollingshead at 10:13 PM

My dear, you have created a monster. That's what you've done.

Yes, a horrible monster who is more confident, comfortable with her body, and can actually admit that she enjoys things like sex.

I should be punished.

Yes, you should be. Go to my room, young man. NOW!

Can I bring a friend?

Not when you're being punished. Don't make me get the whip out.

Why? So I can use it on you? I thought *I* was the one being punished here...

Besides, if I brought a friend, you could both punish me :P