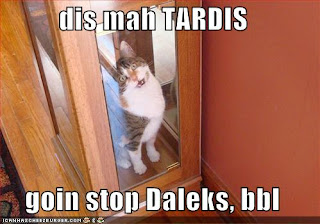 I apologize for the lack of communication both on the blog and twitter the last couple of weeks. I swear that I’m not dead. I’ve just been insanely busy. A lot of things have been happening.

A couple of weeks ago, I moved to Columbus. It reminded me that I hate moving and that I have muscles I keep forgetting about.

It also reminded me how depressing it is to see the material representation of your life transformed into a small mountain of boxes with hastily scribbled notes on them like “Glasses – FRAGILE” and “Books – Computer”. It seems somehow slightly dehumanizing to see things that are important to you being just another box of stuff that you have to find space for in a cargo van.

The move itself went pretty smoothly. My cat even took it pretty well, which was a big concern for me as well as for Karyl. In fact, if you want to have a look at the cat aspects of the move, she’s been chronicling the ordeal over at her blog (link is for the first post in the series).

Now we’re just hoping that her cat calms down since the stress is causing her some health issues (or, rather, aggravating a pre-existing one). We were convinced that my cat would be the problem as far as adjustment goes, but it seems that we were wrong.

The last couple of weeks have been taken up pretty much from the time I get up in the morning until I crash at night with far too many things at once (household, professional, personal, and even just trying to figure out where the heck all of my stuff is). On the upside, all of the running around has gotten me a little more familiar with some of my more frequently visited parts of Columbus, so my GPS is spending more time in my bag than it is on the windshield.

The downside of all of the hectic running around is that I’m not really sure what day it is anymore. I actually have to look at my phone and calendar to figure out when it is and what the heck I have coming down the pipe at me right now. Thankfully, that should improve before too long as things start to get a bit saner and we get into some sort of routine that doesn’t make either of us want to run around screaming. =]

To give you an idea of how busy I’ve been, I got to take off about 3 hours one evening a week ago to unwind and play Diablo 2. It’s seriously been that hectic.

The sad thing is that, when I get the new position (which is part of the hectic day to day stuff – interviewing is easier now that I’m closer, but I feel brain fried afterward), I’m seriously considering asking to start a week later just so I can breathe and possibly catch up on sleep lol

I hope that all of you are well and that I haven’t missed anything big.

Posted by James Hollingshead at 9:27 AM No comments: