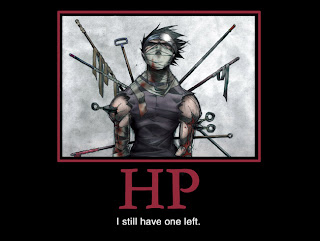 
Last week, the local paper ran a story saying that the new state rep announced a $500,000 grant to help grow the computer gaming industry in this part of the state. It’s supposed to be part of a larger initiative to spur economic development in the fields of information technology and alternative energy.

Personally, I see this as a positive thing. This region needs help in the economic department. It honestly does.

Unfortunately, a lot of the local people disagree. They like their towns the way that they are even though the jobs that the people once had are going away.

They say that they want their towns to be prosperous, yet they decline any opportunity that is presented to them because it would change the way that things are done in the town.

The responses to the article are a case in point. You can’t see all of the comments (or the user names of the people who made the) unless you register, so I’ll give a run down of the general trend in the comments.

The first one was accusing the representative in question of trying to bring the gambling industry into the state when it stated quite plainly that it was console games like the PlayStation and XBox that they were trying to encourage the development of.

After that was cleared up, one of the people there started stating that we shouldn’t even try because this region would never be the IT capitol of the state let alone the country.

I spent the rest of the day going back and forth with this person on the issue because having a viable industry in any given area does not require that you be the “capitol” of the industry. It simply requires that you have the necessary prerequisites (which this town does. It is close to two universities that have good CS programs, is within 1.5 hours of two major cities, has good infrastructure, low cost of living, and plenty of available office space).

After that point was made, the person started attacking the local universities (which I proceeded to defend). In the end, they started to backpedal and lied, saying they were only kidding and trying to get a rise out of someone when it was painfully obvious that they were being serious.

It’s a sad trend, although it is a common one in the Appalachian region of this state. The people in this area are notoriously isolationist. I’m not saying that to be mean or weird. I say it because it’s the honest truth. It comes, for the most part, from the fact that this area was pretty isolated until the highway system was built.

This fact is made fairly obvious by the very distinctive accent that people from this region have (I am an exception to this). Travel an hour to the north (which is out of the Appalachian region), and the accent is completely different.

Before that time, the only ways to get into this area were through mountain passes or to come down one of the rivers. For the most part, the people who settled here were pretty much on their own.

The people in this area need to learn that they can’t just be the big fish in their very small pond. It will take more than a couple of manufacturing plants to save and support the economy here.

Simply graduating from high school and going to work at the mill is not going to cut it for a lot of the people that are in school now, and a lot of the older people in this area think that is exactly what the younger generation should do. They express the general opinion that if their kids or grandkids did anything else it would be a sign that the kids thought they were too good for where they came from.

The older generation honestly seems to think that their kids will grow out of it, get back to reality, and get a job at the nearest factory. The kids, on the other hand, leave the town and only come back much later if at all. There are very very few people in the 18-35 age range in this town. I really wish I was kidding.

They’re going to have to learn to accept change. This is going to be a real challenge, because it’s something that most people who live in this area are very reluctant to do.

Current mood: contemplative
Current music: U2 – Until the end of the World

Posted by James Hollingshead at 8:42 PM